Yes, there is a connection! 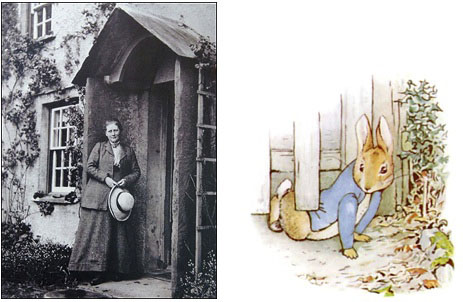 There are actually two connections in the Roscoe family to Beatrix Potter.

The first was Francis (Frank) Roscoe’s cousin in England who was Sir Henry Enfield Roscoe.

Sir Henry was both a Member of Parliament and a famous scientist in England. Frank and Anna Letitia Roscoe would stay with Sir Henry during their trips to England in the 1870’s.

Sir Henry was also “Uncle Harry” by marriage, to Beatrix Potter (1866 – 1943) the author and illustrator of all of the “Peter Rabbit” books.  Sir Henry had married Lucy Potter in 1863. Her brother was Rupert Potter, Beatrix’s father.

Beatrix Potter had stayed with her uncle at “Woodcote Lodge”, Sir Henry’s country home, near Leatherhead, Surrey, in March of 1896.  An addition had been made to  the house to provide a laboratory for Sir Henry and a spacious study for Lady Roscoe. There was also a farm of some 70 acres where Sir Henry raised animals, an attraction for Beatrix.

“To Woodcote, to stay with the Roscoes, which I enjoyed much, being splendid weather and the visit too short for friction”
Beatrix Potter, March 1896

While at Woodcote, Beatrix made microscopic drawings, and found Woodcote a conducive place to work. She looked forward to returning there. Sir Henry further encouraged Beatrix Potter and her interest in scientific botanical drawings by introducing her to five of the most important botanists at Kew Gardens, as well as encouraging her in more scientific practices in her methods and recording. Sir Henry mentored Beatrix in her scientific studies as well, as she produced over 70 microscopic drawings over two years.

The second Beatrix Potter/Roscoe connection was through William Roscoe, the grandfather of both Sir Henry and of Frank Roscoe of Ross Bay Villa.

Besides also being a Member of Parliament and an acknowledged founder of modern Liverpool, William Roscoe had also written a small children’s book in 1808 called “The Butterfly’s Ball and the Grasshopper’s Feast”. This small (5″ x 4″) slim book – one of the first books written expressly for children – with several detailed illustrations, was written to amuse his own children, including his youngest son Robert, as well as William, Frank Roscoe’s father; and Henry, father of Sir Henry.

The book became very popular with 19th century readers, and was set to music by the Order of their Majesties King George III and Queen Charlotte, for the Princesses Elizabeth, Augusta and Mary. 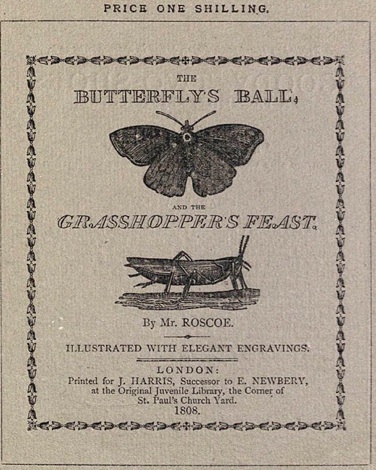 Beatrix Potter admired The Butterfly’s Ball and used William Roscoe’s book and other, more recently published, ‘small’ books as prototypes for the small sort of book that she believed would work best for small hands. Beatrix privately published an edition of The Tale of Peter Rabbit in 1901, and used that book to support her hope for a commercial publisher.

The Tale of Peter Rabbit was published in early October 1902 by Frederick Warne & Co. The book was sold in all of the best bookshops in London. The illustrations were admired for how they enhanced the story, and the animals, with Beatrix’s scientific abilities, were anatomically correct. 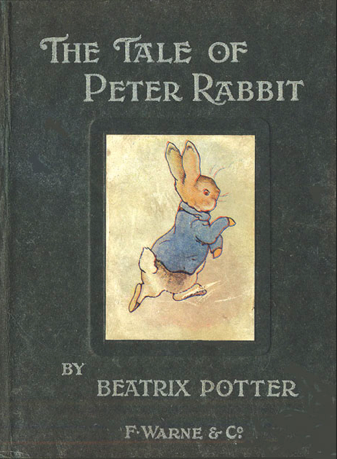 Fourth edition of ‘The Tale of Peter Rabbit’

The success of The Tale of Peter Rabbit – and her 22 other children’s books – made Beatrix a rich woman.  The profits from the books allowed the author to start purchasing land in England’s Lake District, where she eventually owned over 4,000 acres of farms and woodlands.

Beatrix was a long-time friend of Canon Hardwicke Drummond Rawnsley – one of the three founding members of the National Trust.

When Beatrix Potter died in 1943, she left all of her land to the National Trust, including her home and 14 farms, and woodland and countryside. All of the farms are still working farms managed by tenant farmers, in accordance with her wishes. Her home is open to be visited, and the National Trust continues her conservation work in the Lake District to this day.

Left: National Trust property in the Lake District
Right: Beatrix Potter’s home ‘Hill Top’, which is open to the public