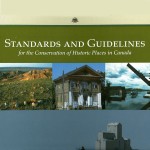 Every inch of Ross Bay Villa has been restored by volunteers since 2000.

Following the Standards and Guidelines for the Conservation of Historic Sites in Canada, work parties have shored up the foundations; rewired the house; installed a fire protection sprinkler system; installed visitor washrooms; painted the exterior; and reroofed the house.

Some of this work, of necessity, 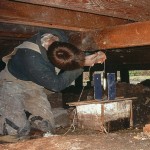 was done by outside, paid contractors, who often kindly reduced their fees for this project.

But the bulk of the work was accomplished by dedicated volunteers, who cheerfully worked in the confined crawl space, replacing beams and posts, or who scraped the exterior to repaint the house.

Chimneys were repointed, and missing roof finials were sized up from archival photographs, drawn to full scale and then turned and reinstalled on the roof peaks. 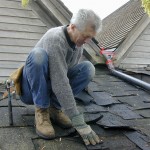 Others drew up measured drawings, which allowed planning for the reconstruction of old walls that had been removed c1912, to restore the original floor plan.

The new walls, lathed with wood strips salvaged from demolitions, were then plastered with lime plaster reinforced with horsehair (cut up from a horsehair mattress purchased by a volunteer at auction) to match the original walls. 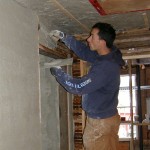 Floors were repaired where rot threatened safety, and wood mouldings were matched and installed. Missing doors were remade to match surviving examples, and a broken cast-iron fireplace surround was carefully recast by a local foundry.

Volunteers removed old wallpaper with scalpels, layer by layer, preserving each design, and pin-pointing each hole in the wall to record where pictures once hung, 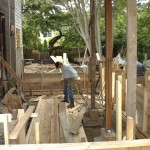 and hardware was placed.

Wallpapers and historic borders were recreated and installed; and other walls were painted, and woodwork oak-grained, to match the carefully researched original finishes.

Rewired, ornate, kerosene lamps were once again hung where they had originally illuminated the rooms, giving a soft illumination for evening tours.

After 14 years of restoration, 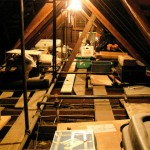 After moving the collected historic furniture into place, Ross Bay Villa is now a focus of history, of education, of amazement, and enjoyment.