The Roscoe family was both well-connected and influential in England.

William Roscoe – the grandfather of Francis J. Roscoe of Ross Bay Villa –  was a Member of Parliament; an author; and a slavery abolitionist. He is responsible in establishing a number of Liverpool institutions, including the Liverpool Botanical Garden which he founded in 1802, which is one of the oldest horticultural collections in Britain. 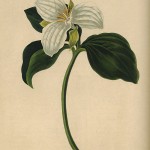 He also founded the Royal Institution – the art collection that became the Walker Art Gallery, and as a Member of Parliament, helped to abolish the British slave trade in 1807.

William Roscoe was an expert botanist, and his book ‘Monandrian Plants’ was the first to cover the whole of the Ginger family. Its beautiful illustrations were drawn by several artists including Margaret Roscoe, his talented daughter-in-law. One of her botanical illustrations for ‘Trillium Grandiflorium’ is at right.

He was also a prolific author on many other topics as well, and kept up a prolific correspondance with people such as Thomas Jefferson.

This section is being researched and written, and will shortly be updated and expanded.

The image of William Roscoe is courtesy of the Liverpool Museum