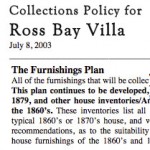 Early in the restoration process, it became obvious that we could have a beautifully restored house, but with empty rooms.

A Furnishings Committee was then established, made up of volunteers with backgrounds in museums and historic sites. This Committee has now been renamed  the Curatorial Committee, acknowledging its greater responsibilities.

to give an appropriate focus for collecting only those artifacts and furniture that would be appropriate to the furnishing period of Ross Bay Villa – when the Roscoe family lived in the house from 1865 to 1879.

The Auction List of 1879 was used as the basis of a furnishings plan. The listed items were first to ensure that they would be represented.

A few key items like the sideboard, a whatnot, the Brussels carpet in the Drawing

Room and some chairs were purchased, but most of the 1860’s furniture at Ross Bay Villa was donated, including several important pieces from a volunteer from another historic site.

Other items were picked up at local thrift shops by eagle-eyed volunteers, where mid 19th century artifacts can still be found for bargain prices!

1860’s china; framed seaweed from the Colony of Vancouver’s Island; reproduction 1860’s fabric for the lavish Drawing Room curtains; and much more,
were all donated. 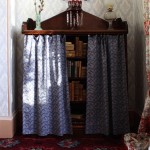 A very special piece of furniture was donated back to Ross Bay Villa by Mr. and Mrs. Hewison, who lived in Ross Bay Villa from 1952 to 1988.  An original and rare Colonial bookcase – specially made for a niche beside a fireplace in Ross Bay Villa – is a highlight of the furnishings of the house.  In a gothic design, with remnants of a brass curtain rod – important to shade leather book bindings from harmful sunlight – this piece of furniture was in the house when the Roscoe family lived here. Carefully cleaned, and curtains rehung, 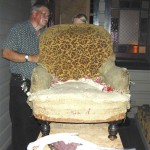 and filled with period books, the bookcase has quietly taken its rightful place among the other historic furnishings.

Furnishing an historic home is a slow process, and the work continues.

Upgrading, reupholstery, repairing and conserving the existing furniture occupies volunteers who are determined to make the interiors of Ross Bay Villa welcome visitors  – accurately – back into another time.