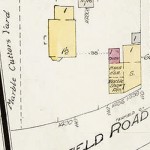 Described in 1869 as a “cottage” by Sir James Douglas in a letter to his daughter, the dwelling is better described as a “Villa”, which in Victorian architectural terms, was the country dwelling of a gentleman.

And Francis James Roscoe was a gentleman.  The British Colonist described him as: “exceedingly fond of literature and a man of refinement and culture”.

Ross Bay Villa, though modest, was a family home
built in the Gothic-Revival style 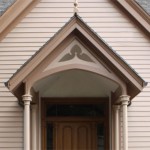 on the old Fairfield Farm Estate.

In the early 1860’s,  Fairfield Farm, to the east of town, was being subdivided into “Small Lots of 5 acres and upwards” for “sites for Buildings and Gardens”.

Evidence points to the house being designed by Wright and Sanders, Victoria’s first professional architects in Victoria, who were active in this period. 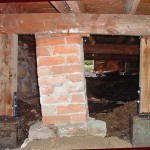 Though plans for the house do not exist, certain details – such as the split-double-flue chimneys above the roofline, are similar to other known Wright and Sanders designs. Additionally the Chronicle newspaper had a tender call by Wright and Sanders on April 25, 1865 for “a suburban residence”, though there is no proof it referred to Ross Bay Villa.

The fine detailing of the front porch, with its gothic trefoil screen supporting the porch roof also points to a designer of experience and taste. 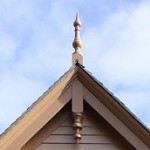 The house is built on a crawl space. Like other Wright & Sanders houses, the foundation was constructed of brick piers to a height of about three feet. There, frame construction took over. First-growth Douglas fir beams – half dove-tailed over the piers – supported the floors.

Walls were framed to a height of 11 feet 11 inches. They were lathed and plastered with lime plaster reinforced with horsehair.

The house is all on one level.

The attic above is formed in a “U” shape over the rooms.

The roof was originally roofed with split shingles (not shakes) with a 5″ reveal. Turned wood finials topped the four main gables and the front porch.

The main brick chimney rises through the roof and splits into two – one flue for each fireplace – before rejoining at the corbelled cornice of the chimney. The split chimneys – commonly used as a design device by Wright and Sanders – are another clue that the early architects were probably responsible for the design of the house.