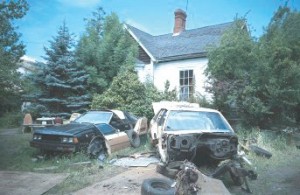 Ross Bay Villa was built in 1865. It is one of only a dozen or so houses of the 1860’s still standing in the City of Victoria.

By 1999 it was in a very bad state of repair, and the owners – a group of six local businessmen – applied for a demolition permit to allow redevelopment on the property.

The application was heard at the Heritage Advisory Committee at City Hall.

Two members of that committee, Rick Goodacre and Stuart Stark, asked for more time, citing the house’s rarity and early date of construction. The heritage community had been aware of the house for some time, and caution was called for. More time was granted.

Meetings were held with the City Manager, the Mayor and members of council. Other meetings were held and the property discussed.  In June of 1998, the Hallmark Society had published The Winter House: Ross Bay Villa, and republished as Ross Bay Villa: A Colonial Cottage in 1999. Finally, Bill Turner of The Land Conservancy [TLC] said that sounded like a suitable property for his organization to take on. With $12,000 of money from donations raised from the heritage community, and a $50,000 loan from the Heritage Building Foundation of the Hallmark Society, Ross Bay Villa was purchased in 1999 by TLC with a mortgage. 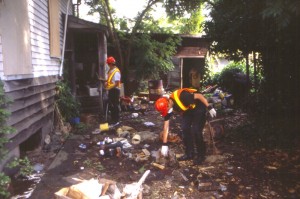 Money was raised through grants and donations. Working drawings were drawn up. An archaeological dig was undertaken on the grounds to determine locations of paths, and to retrieve artifacts.

Volunteers removed huge amounts of garbage from the site and house, filling three giant skips to be hauled away by trucks.

More archival research was undertaken, and the connection with Francis James Roscoe and his family was determined. The volunteer Restoration Committee decided to restore the house to the period (1865-1879) when the Roscoe family lived in Ross Bay Villa.

Fund raising continued. Over $500,000 – comprised of grants from the federal government, the provincial government, City of Victoria through the Victoria Heritage Foundation, and donations by local businesses and many private individuals – paid for the restoration work between 2000 and 2014.

As of 2015, over 72,000  hours of volunteer labour has been accounted for as work proceeded, conservatively valued at over $1.2 million in value towards the property.

A Research Committee was also formed, to start to gather information and photographs on the early residents of the house. This committee was particularly successful when contact was made with a descendant of the family, who still had Mrs. Roscoe’s diary from her time at Ross Bay Villa. 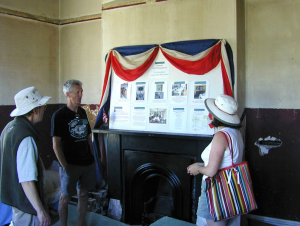 During all of this period, as work was progressing, public tours were held at Ross Bay Villa to educate visitors of the significant history of the house and the people who lived in it.

To recognize Francis Roscoe’s time as a Member of Parliament, an annual event in the form of a Canada Day Lawn Party was set up, with tea on the lawn under tents; tours of the house at 20 minute intervals throughout the day, and sales of plants and books, as well as booths where you could sponsor the restoration of a square foot of wallpaper, or the reproduction of one of the original stoneware Doulton gothic garden edging tiles, which had been found in pieces throughout the site.

After 14 years of restoration on the house and garden, the work was essentially completed. The members of the Ross Bay Villa Society wanted to celebrate.

On August 4, 2013, The Honourable Judith Guichon, OBE, Lieutenant Governor of British Columbia, on the invitation of the newly formed Ross Bay Villa Society, came to Ross Bay Villa for a celebration of 14 years of restoration of this significant historic site.

Her Honour had a tour of the house, and then stood on the front porch, made a gracious speech about the necessity of preserving heritage in British Columbia, then cut a red ribbon and declared Ross Bay Villa “Open” to the enthusiastic crowd in attendance.

In 2015, members of the volunteer Ross Bay Villa Society were concerned about the survival of Ross Bay Villa as a Historic Site.  The owner, The Land Conservancy [TLC], had been going through massive financial difficulties through 2012 to 2014.

In 2013, they announced their intention to sell heritage properties that they owned in order to pay debts estimated at $7.5 million. Initially, Ross Bay Villa was on that list. It was possible, at that point, that all of the restoration by volunteers, and all the donations and public money that had gone into the project would be lost.

Thankfully, The Land Conservancy was able to rethink their plans. They devised other ways to pay their debts and fulfill their moral obligations to preserve most of their properties. In late 2014, TLC offered the Ross Bay Villa Society the opportunity to purchase Ross Bay Villa for the cost of the outstanding mortgage. An agreement was signed, and fundraising began. The “Ross Bay Villa Ownership Campaign” began in earnest to raise the money to pay off the mortgage.

In March of 2015, TLC‘s creditors and the courts approved  TLC‘s Plan for the future ownership of its properties, including Ross Bay Villa. Fundraising continued. 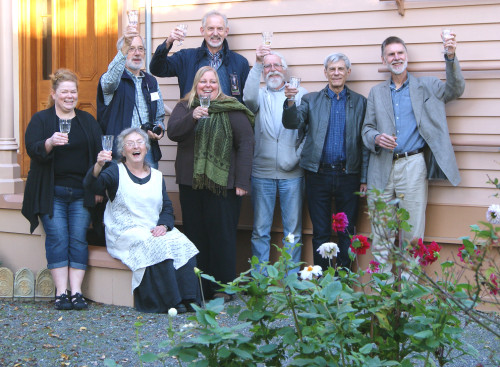 Finally, on October 23, 2015, the Ross Bay Villa Society purchased Ross Bay Villa for the cost of the outstanding mortgage – approximately $130,000 – ensuring the survival of the Heritage property.

Above: the Board of the Ross Bay Villa Society celebrate the purchase of Ross Bay Villa, after a year of planning and fund-raising. 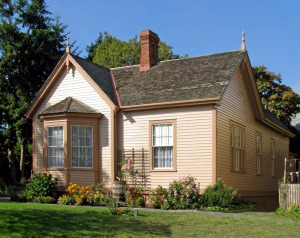 They are planning for more tours, lectures, special events, and innovative fund-raising to ensure that Ross Bay Villa, and its remarkable history, will endure for future generations.

They want Ross Bay Villa, built in 1865, to continue to be a vital part of the Fairfield neighbourhood of Victoria, where it it one of the oldest structures still extant.

An Endowment Fund, to ensure a long-term, stable source of funding, was established in October of 2015, with the very welcome first donation of $10,000 from Grace Walker, a local resident, and one of our members. We thank her very much, and encourage others in the community to donate to this very necessary fund.

Please see the section on “Support”  on this website, where there is information on how to make a donation to either our Endowment Fund, or our Operating Fund.  The Ross Bay Villa Society is a Canadian Charitable Organization. All donations are tax deductible.

You could also become a Member; or be a Volunteer.  Members and volunteers are the lifeblood of the organization.

If you wish to contact a Board Member, please email at: info@RossBayVilla.org