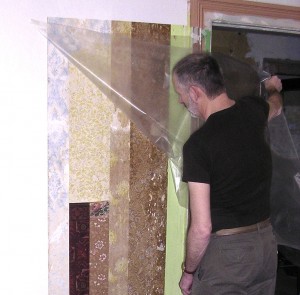 To find what the original decoration of the Drawing Room and Dining Room of Ross Bay Villa used to look like, a great deal of careful investigation took place.

Volunteers carefully and precisely removed up to seven layers of wallpaper using scalpels, to gently reveal each layer for recording purposes.  The intention was to reveal the first layer of wallpaper that the Roscoe family would have installed shortly after 1865.

Samples were then taken, showing a full pattern repeat, and the design was scanned into a computer.  Using Photoshop, a designer recreated the design, tracing each tiny nuance of the original design exactly, while separating each colour drawn into a different layer. Slight adjustments only were made to ensure that the pattern matched across the paper and from top to bottom.

After that, the designs were sent to England, where the designs were engraved onto metal rollers – each colour on a different roller. The designer travelled to England to a factory that still specializes in the same method of printing that was originally used to produce Ross Bay Villa’s wallpapers: Surface Printing. 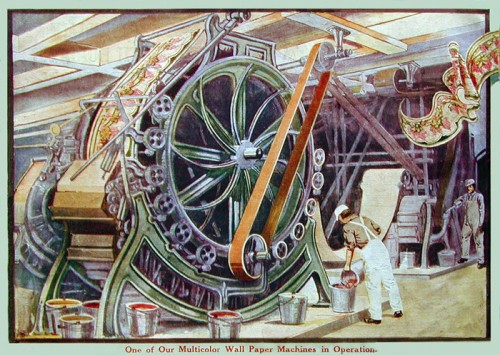 This is a mechanized, wet-on-wet method of printing that in 1865 was just beginning to replace wood-block printing. A huge, metal machine, looking rather like a 12 foot high Ferris wheel, is set up with rollers and a different ink tray for each colour.  Paper from a huge roll is fed into the bottom of the machine, and once careful alignment and set-up has occurred, test lengths are printed to match the historic samples that the designer had taken to England. Several test lengths were produced to ensure an exact match. 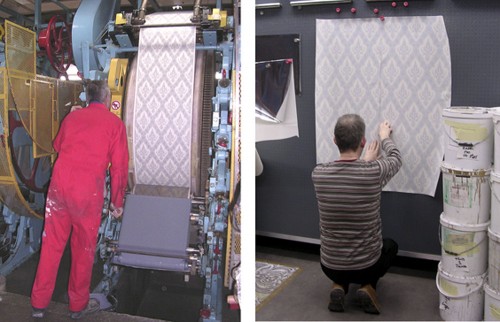 Left: Printing the Drawing Room wallpaper for Ross Bay Villa
Right: Checking that the pattern matches from side to side

Left: Hanging white lining paper to provide a smooth, conservation surface
Right: Pasting the wallpaper with wheat paste before hanging on the wall

A rag-content lining paper was hung on the walls to preserve the original layer of wallpaper still on the walls of the Villa, to smooth the walls, and to help prevent any deterioration of the new reproduction wallpaper.

Both the Drawing Room and Dining Room of Ross Bay Villa were re-wallpapered with replica wallpaper that matched the original in design, colour and printing method.  Wallpaper, with its period design and colouring, gives an appropriate background to period rooms like no other surface can. 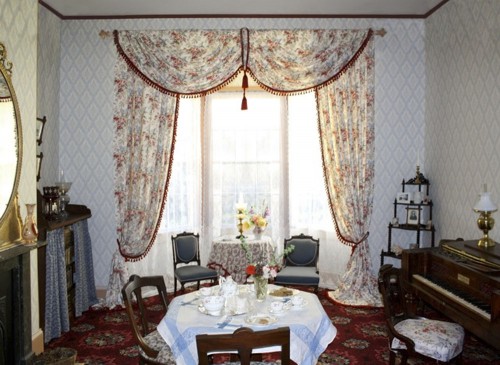 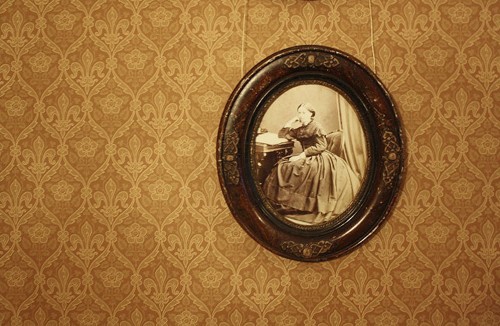 The Dining Room wallpaper at Ross Bay with a photograph of Anna Letitia Roscoe. 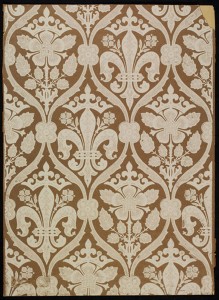 After printing the Dining Room wallpaper, further research revealed that the Gothic-revival design – with its motifs of Fleur de lis and Tudor roses – was based on a wallpaper hung in the Houses of Parliament in London.

Charles Barry, the architect of the Houses of Parliament, asked architect Augustus Welby Pugin to design the interiors, fittings and furnishings of the new building.

Pugin’s wallpaper design, circa 1850, is shown at left. The two wallpapers – that from Ross Bay Villa and the Houses of Parliament – differ only in scale, and in slight detail. The original design had crowns at the top of each motif which were substituted for more leaves in the version used at Ross Bay Villa in 1865.

The illustration shown was a re-printing (circa 1953). The original wallpaper from 1850 was printed in green flock on a gold ground. That paper was made by Samuel Scott for J. G. Crace, decorators, and used in the decoration of the Houses of Parliament when the building was new.

It is interesting to speculate whether Ross Bay Villa’s wallpaper – hung only 15 years after the original was hung in London – was familiar to Roscoe, with his grandfather, uncle and aunt’s father all being Members of Parliament. Might he have chosen it because he was already familiar with the ‘look’ – being suitable for a future Member of Parliament in Canada?

We may never know, but that sort of discovery and speculation makes preserving a historic building a fascinating endeavor, and one that is gratifying to share with like-minded visitors.

Illustration courtesy of the Victoria & Albert Museum, London, which holds the original c1953 sample in their collection.