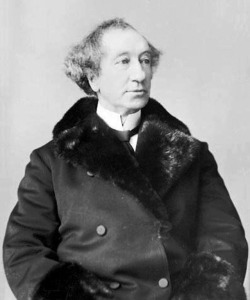 Canada’s first prime minister Sir John A. Macdonald is returning to Victoria to help celebrate the 150th anniversary of the construction of Ross Bay Villa.

On Sunday (May 3), the Salon Acting Company of Kingston, Ont. performs a musical theatre presentation in the Ross Bay Villa garden, as part of the bicentennial
celebrating Macdonald’s birth. It begins at 2 p.m. Tickets are $10 each.

After the presentation, the theatre troupe, carrying historic campaign signs, will gather at City Hall’s Pandora Street entrance, with special guests for a public event.

The Salon Theatre Group will present two musical numbers about Sir John A. Macdonald. Victoria lawyer Chris Considine will also speak. He is the great-grandson of Sir Joseph Pope, private secretary to Macdonald.

The City Hall event begins at 4 p.m. and is free to the public.

Francis Roscoe of Ross Bay Villa, was a MP for Victoria from 1874 to 1878. An ardent supporter of B.C. joining Confederation, he resigned his seat in August 1878. The vacancy made way for Macdonald to be elected as MP for Victoria when lost his seat in Kingston, Ont.

For a list events planned at Ross Bay Villa for the 150th anniversary, please go online to rossbayvilla.org.