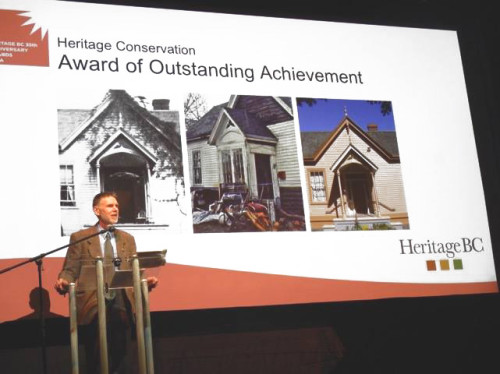 Davyd McMinn, Vice president of the Ross Bay Villa Society, on behalf of the Society, is shown accepting the

Presented to the Ross Bay Villa Society from  Heritage BC.

The award were presented at the 35th Anniversary Awards Gala evening, held on Thursday February 18, 2016 – during Heritage Week – at The Imperial in downtown Vancouver.

The Imperial, at 319 Main Street, is an excellent example of adaptive reuse of a culturally significant heritage building. The previously abandoned Chinese-language movie theatre has been transformed into a fabulously renovated venue that respectfully nods to its past.

The Board, the members and the volunteers of the Ross Bay Villa Society are all very grateful for this provincial recognition of the sixteen years of hard work put in by volunteers since 1999, when the Villa was saved from demolition.

See the Heritage BC website here.
See a story in the Vancouver Sun about The Imperial here: