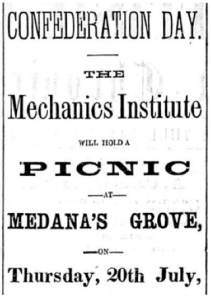 Tea in the Garden! Tours of the Villa! 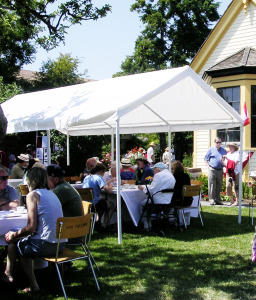 In the Summer of our 150th year, The Ross Bay Villa Society will recreate aspects of the Confederation Day Mechanic’s Picnic, held on July 20th, 1871, to celebrate B.C. joining Confederation Day! Francis Roscoe, a booster for British Columbia to join Canada, had a major hand in organizing the day. He paid for the fireworks in 1871.
Alas! Our event will be held in the afternoon, so no fireworks, but there will be costumed characters, chinese lanterns in the trees, and Victorian Fairground Games.

There will be Teas in the garden in tents under the apple trees, and Tours of the restored rooms, with the Special Dining Room Exhibit!

Free admission to the grounds, music, and outside exhibits.

Special Exhibit: July and August. Included with Tour Entry to the Villa:
‘A Victorian Dining Room’: The dining table laid for a formal dinner with an 1860s dinner set of ‘Tea Leaf” china; glassware, silver, snowy linen and flowers.